We began calling him Thumper as his legs got worse this spring.

Murphy, then not quite 12, would thwap his tail on the wooden floor enthusiastically each morning as we came downstairs to greet him.  Unable to climb stairs anymore, he’d lie sentry at the bottom.

Camped there at night, our Goldie carried us through the worst of Covid.  By April he no longer left our yard, wobbling around the house like a drunken sailor, somehow finding the balance to inhale acorns or the occasional divot of dirt.

That was Murphy, forever lovable, endlessly incorrigible. Our third golden retriever, he was our own version of the story, “Marley and Me.”  Nerve damage took his legs and feet. Sometimes

he’d topple to his knees. Sometimes he’d fall on his side. But never did his smile nor his lick leave him.  I don’t think he ever met a person, an animal or anything approaching edible that he didn’t like.

He was dog with a huge heart and a defiant brain, one who sometimes drove us crazy  with his barking and thievery, but filled an enormous space in our lives. The worst behaved of our three goldens by far, he also, in certain ways, will be the least forgettable.  On the beach, he’d ignore other dogs and do his best to dig to China. He

ate tennis balls, multiple dog beds, grass, dirt, stuffed animals, cat litter, any food left anywhere within reach, and, once as a puppy, our kitchen wall.  He demanded a baby carrot or two to do anything — get up, get out from under the table, go out the door. Off leash, as a younger dog, he’d bolt, often enough so that we learned to keep him leashed except on the beach.

And when Kathy cooked, she’d barricade herself in the kitchen, sometimes with Murphy barking in indignation. Nothing could be left unguarded.

If Murphy proved untrainable (but good at training us), he also was unrestrained in his love. He’d crawl into our laps, look up with big, brown, buttery eyes.  Even when we had to help him up in the end, his gentle affection remained undiminished.

Today, the end of summer, it was time to say goodbye.  We drove him to the vet, Murphy beside me in the back seat, and sat with him outside, where the kind vet first gave him a sedative and then a shot to end his life.  If I were typing on paper, it would be too wet to read these words right now.

We will miss him mightily, though it will be nice to eat without the barricades or his nose resting in someone’s lap, waiting for a stray pea or two to drop. Murphy, to be polite, could be a challenge. When we went on a five month sabbatical to France in 2014, the family that moved into our Lexington house probably had little idea of what they were getting into. They put up a series of gates indoors to control him, which we kept until we moved.  When we visited friends, they’d sometimes plead for us to leave  Murphy  in the kennel.  Still, the college students we hired over the years to house sit for a weekend or short vacation all loved him, asking after him to the end.

In his final months, Murphy’s sweetness outweighed all else. Mornings, he’d sit patiently while Kathy massaged his legs and hips, trying to give him a few more weeks, a little more durability.  When Devon or I would sit on the floor, he’d drape himself over our legs and, as always, put his head in our laps. Those are the images I will hold onto.

Goodbye my gentle Thumper.  We hope that you enjoyed all the extra attention from us in this year of isolation as much as we enjoyed yours.

Start to finish, you were an original.

4 Replies to “Goodbye Old Friend: May You Yet Dig Your Way to China” 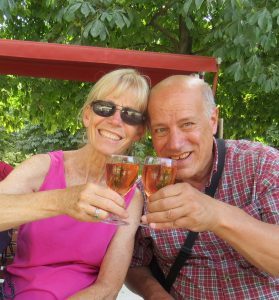 I’ve never measured a successful trip by how many destinations I can circle on a map or check off a Bucket List.  To me the best journey, and the best ravel, moves more like a good conversation. It ebbs and flows. It rarely rushes, but it’s also animated and unpredictable. It is filled with banter and laughter, and invites participants to linger rather than march forward inexorably like a tightly wound clock. Want to have dessert?  A second glass of wine? A detour in a back-alley artisan’s shop? A pause at an overview by the side of the trail? Why not. Read more.